Earth, Wind & Fire is metaphorical for the gravitational and environmental energy of earth-mass, wind and the sun. In imitation of Empedocles (“earth, air, fire and water  the elements of everything”), water could be added to these. In the Earth, Wind & Fire concept, water is, indeed, an essential medium but, as such, not a source of energy and, therefore, not included in the triad.

In a long cooperation with architectural and engineering students, several intuitive ideas originated about the potentials of linking indoor climate technology and energy aspects to architecture.

Initially, various analytical and intuitive ideas were mathematically developed and a selection was subsequently made ​​from the most promising concepts. These included three responsive architectural elements including the Ventec Roof, the Cascade Climate, and the Solar Chimney or Solar Façade. These elements were initially developed separately, optimized, and evaluated but, ultimately, they constituted a complete concept of air conditioning as a symbiosis with the architecture of a building – see the figure below.

The Ventec Roof exploits positive wind pressures for supplying ventilation air through the pressure chamber (1) and the Climate Cascade to the building. Negative wind pressures are utilized to extract air from the building via the Solar Chimney and the Venturi ejector (6). This concept utilizes the relatively good air quality at higher altitudes. Furthermore, due to the horizontal separation between supply air and exhaust air, short-circuiting  between the two air flows is avoided.

The Ventec Roof, in principle, can also be employed for the generation of wind and solar energy, thereby meeting the second condition of the EPBD Recast. 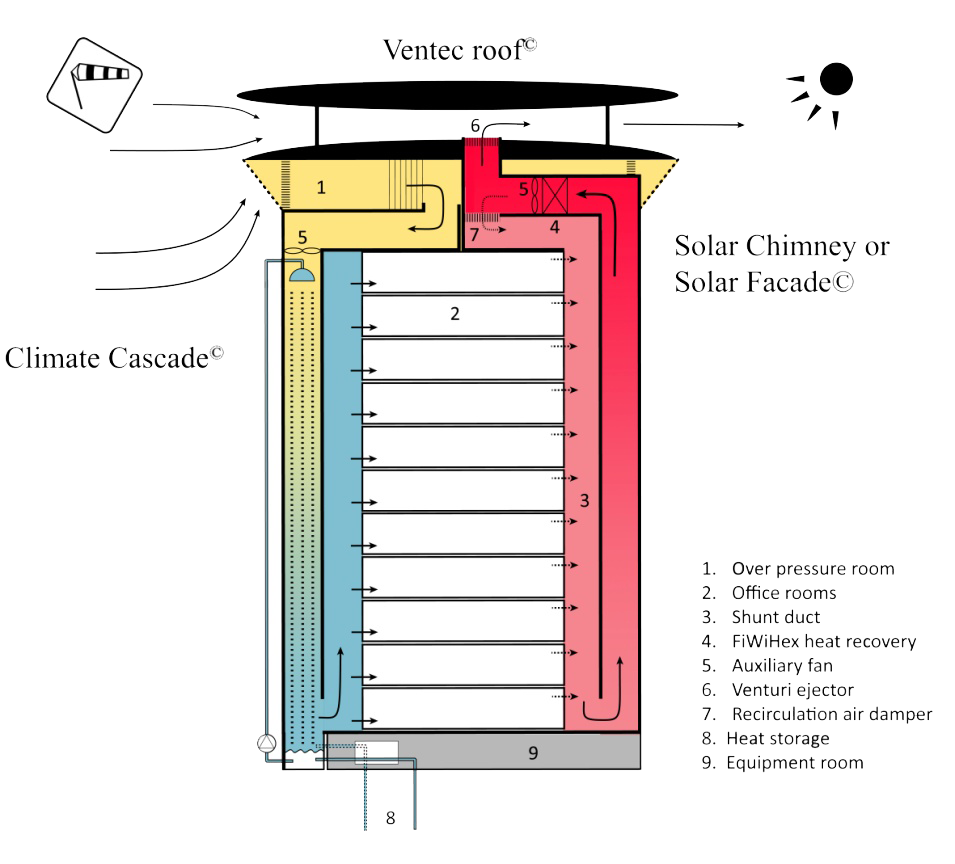 In the over pressure room, wind turbines are provided (not illustrated in the drawing) by which, in principle, high power coefficients can be realized. Potential noise problems are easily resolved by the indoor positioning, and maintenance can be performed from the inside of the building. As these wind turbines are part of the technical building services, no environmental permit is required.

The upper roof is provided with a thin film PV roofing foil that, despite a lower efficiency, has a better cost-effectiveness than solar panels. Anno 2011, in the reference year NEN 5060:2008, an annual energy yield of approximately 100 kWh.m-2 is reachable.

The core of the climate system is the Climate Cascade which is designed as an architectural shaft and performs as a gravity-activated heat exchanger for conditioning the ventilation air,.

Within the Climate Cascade, ventilation air is being cooled or heated, dried or humidified as needed. At the top, in summer and winter, water of approximately 130C is fed through nozzles and, by momentum transfer from droplets to air, the downward air movement from the over pressure room is enhanced. With this aerodynamic pressure, together with the hydraulic pressure and the downward thermal draft, fans become superfluous. The required cold is extracted from the soil, and heat is directly or indirectly supplied by the solar chimney.

Because of the high heat transfer coefficient from the falling droplets to the air and the immense active surface of the millions of droplets in the spray spectrum, the Climate Cascade operates with a very minimal temperature difference between air and water.

Ventilation air is extracted through the Solar Chimney or Solar Façade in which solar energy is harvested to be exploited for heating the building during the heating season. With the assistance of a heat exchanger at the top of the solar chimney, the solar heat is transferred to circulating water and fed to the heat and cold storage in the soil under the building. This technique is applied in horticulture for cooling and heating greenhouses. The Venturi ejector in the Ventec Roof serves partly to compensate for the pressure loss of the heat exchanger.

The thermal performance of a solar chimney, which, at a certain building height, is mainly determined by the width of the chimney, is only minimally tailored to the exhaust volume flow at reference conditions. These are arbitrarily set at an outside temperature of 200C and a radiation flux of 400 Wm-2.

With the application of a proper type of glass, an annual efficiency of approximately 60 percent can be achieved. The total radiation on a south facing surface in the reference year NEN 5060:2008 is approximately 860 kWh.m-2 per m2 thus a yield of approximately 500 kWh per m-2 solar chimney may be expected.

For the morphology of a solar chimney, numerous variants are conceivable in which the gable covering the Solar Façade yields the highest energy performance.

The airflow for the supply of ventilation air through the Cascade Climate and the exhaust, thereof, through the Solar Chimney or Solar Façade is caused by pressure differences. These are generated by density differences between colder and warmer air and are proportionate to the height of the Cascade Climate and Solar Chimney or Solar Façade. Given the relatively minimal temperature and pressure differences, a certain minimum height of the building is necessary. The research is based on buildings with a minimum of 4 stories at 3,5 meters[2].

The developed Earth, Wind & Fire concept should be considered a central facility for the air conditioning of buildings that can replace the central mechanical ventilation of a building.

Decentralized facilities for heating and cooling at the workplace level such as climate ceilings, fan-coil-units, radiators, etc. can be combined excellently with the concept.

Although not intended for use in residential buildings, several elements can also be of use in apartment complexes.

The Earth, Wind & Fire concept is a total concept. This does not mean that the responsive elements in the developed study can only be used in combination. A stand-alone application of a Solar Chimney and Solar Façade, a Ventec Roof or Cascade Climate in office buildings is quite feasible.

The Earth, Wind & Fire concept can be applied in any architectural style including classic, modern, international, postmodern, bioclimatic, etc. It is the architect who shapes the development of the building as a climate machine.

New construction can dedicatedly be designed on the basis of the Earth, Wind & Fire concept. In the event of significant renovations of existing buildings, the concept may also be applied either in part or in its entirety. A Ventec Roof and Solar Chimney are possible additions to a building, and existing facades can be converted into Solar Facades. Existing installation shafts can be converted to Climate Cascades as indicated in a performed case study. This aspect may also play a role in the choice between demolition or renovation of existing buildings. It is often intuitively decided to renovate, but research indicates that renovation in relationship to environmental performance is not always an obvious choice.

[1] From Vent and Tect, Latin for Wind and Roof, but also for Ventilation and Technology

[2] In Anglo-Saxon literature,  often referred to as “Low-Rise Buildings”

This website uses cookies to improve your experience while you navigate through the website. Out of these, the cookies that are categorized as necessary are stored on your browser as they are essential for the working of basic functionalities of the website. We also use third-party cookies that help us analyze and understand how you use this website. These cookies will be stored in your browser only with your consent. You also have the option to opt-out of these cookies. But opting out of some of these cookies may affect your browsing experience.
Necessary Always Enabled
Necessary cookies are absolutely essential for the website to function properly. This category only includes cookies that ensures basic functionalities and security features of the website. These cookies do not store any personal information.
Non-necessary
Any cookies that may not be particularly necessary for the website to function and is used specifically to collect user personal data via analytics, ads, other embedded contents are termed as non-necessary cookies. It is mandatory to procure user consent prior to running these cookies on your website.
SAVE & ACCEPT